The Tokyo 2020 Olympic Games marked a huge moment for RBC Training Ground, with eight graduates competing on the Olympic stage for the first-time in history – four of whom brought home medals. Now, RBC Training program grads are set to make their Olympic debuts at the Winter Olympic Games – some in a sport they may never have considered without the program.

Learn more about these athletes’ powerful stories below! 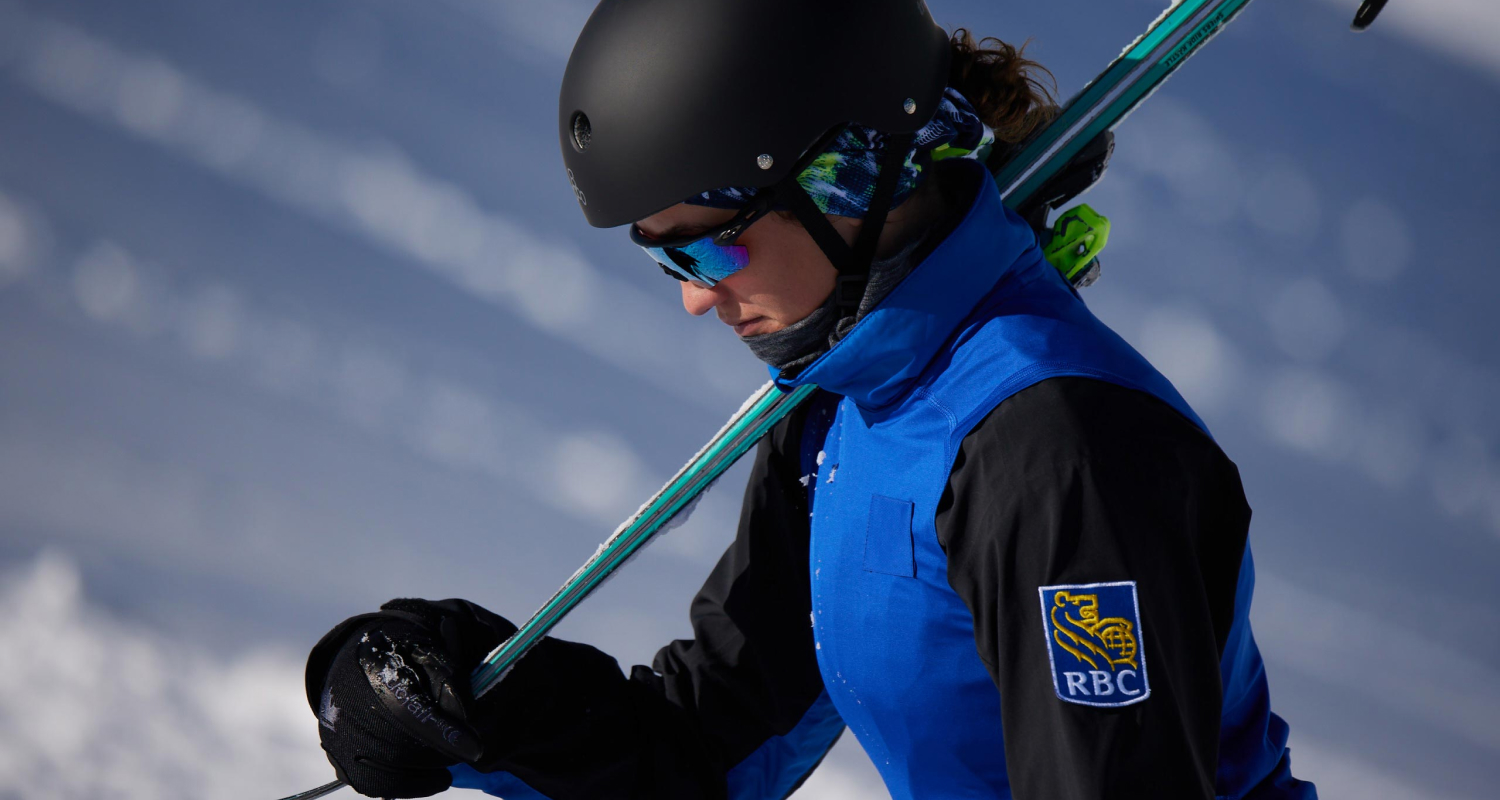 Marion developed a passion for sports and acrobatics at just three years old when she was enrolled in gymnastics, and ended up being both a gymnast and trampolinist for over 14 years. At 17 years old, Marion was a high school gymnast ready to retire from sport, when she had the idea to attend an RBC Training Ground event in Québec. Little did Marion know, this would be a pivotal moment in her life. Recognizing the transferable talent a gymnast could have in Aerials Skiing, Freestyle Canada took notice of Marion at the event and invited her for sport-specific testing. Being unfamiliar with Aerials at the time, Marion replied that she was open to anything and later looked up the sport on YouTube. “Oh no,” she recalls thinking. “Those people are crazy.”  But it was too late – Marion was already excited about the prospect of a new sport that she may be able to excel at. Similar to Kelsey Mitchell’s experience in Cycling, Marion’s rise in Aerials has been nothing short of spectacular. She was invited to join the National Team in 2020, where she went on to win the Canadian Championships in her first year competing. In her second year, she won the NorAm Tour and a World Cup in her third year. Marion was announced as part of the RBC Olympians roster in 2021, and is now on her way to compete in her first Olympic Games in Beijing. Congrats, Marion!

“It was at an RBC Training Ground event that I discovered I might be a good fit for aerial skiing. After receiving RBC Future Olympian funding to pursue the sport, I’ve never looked back. I’m living proof that this program helps make Olympic dreams a reality.” – Marion Thénault 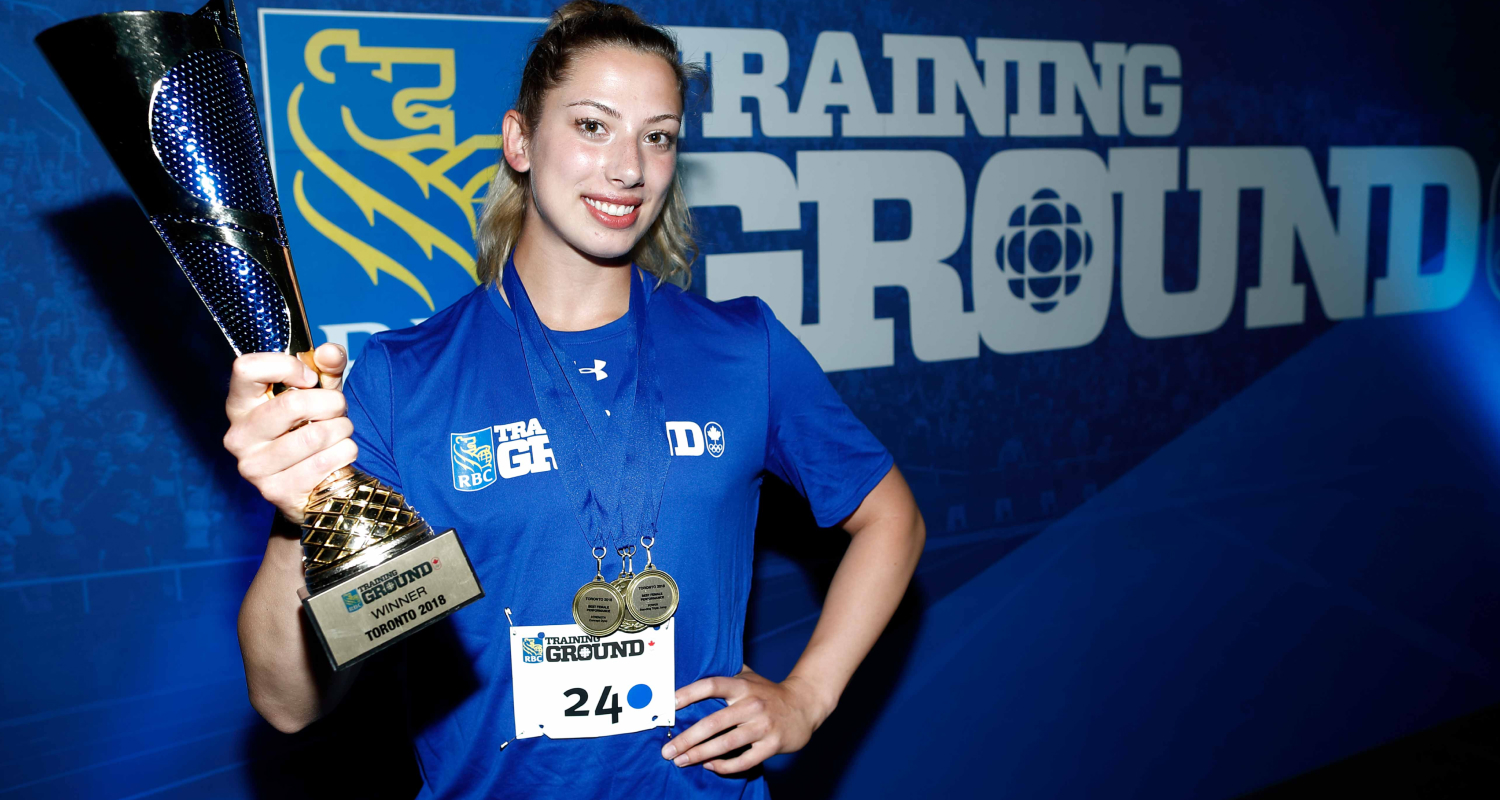 Similar to Marion, the drive for Sara to become an athlete started back in her gymnastics days as a young child. She knew early on she would not be able to continue with the sport, but was keen to find her next passion. In came Track and Field, where Sara found success in her early high school career and went on to continue pursuing the sport at a university level. In her first year of training at Western University, Sara won the 2015 Junior National Championships in the Heptathlon, which qualified her to represent Canada at the 2015 Junior Pan Am Games. In her second year, while competing in the Pentathlon at the Provincial University Championships (OUAs), she miscalculated a step in one of her long jump warm-ups and would later be diagnosed with a bone bruise in her ankle. Sara ended up taking home Gold and was ranked first going into the Canadian University Championships (CIS, now USports), but the pain in her ankle was severe. At CIS, she got to the second event, high jump, and it was evident she would not be able to continue the competition.

After this experience, Sara became very unsure of her next steps. In 2018, Sara decided to attend an RBC Training Ground event to see what would happen, and ended up winning a few of the individual events and the top score for women. It was here where she was recruited to join several different sports’ National Teams, including Bobsleigh. In December 2018, Sara had her first experience in a bobsled in Calgary. She had no clue what to expect, and shockingly her first run down the track ended in a crash. Luckily, that did not scare her off and she finished the week of training. She came back home to Ontario and knew from that moment that she was going to become a bobsledder.

In October 2019, Sara was announced to the Team Canada Development team and in her second year in the sport earned a spot on the Senior Bobsleigh Team. Sara was also recently named to the RBC Olympians roster and has her eyes locked on the ultimate goal of the Beijing 2022 Olympic Winter Games. We’re so proud of you, Sara! 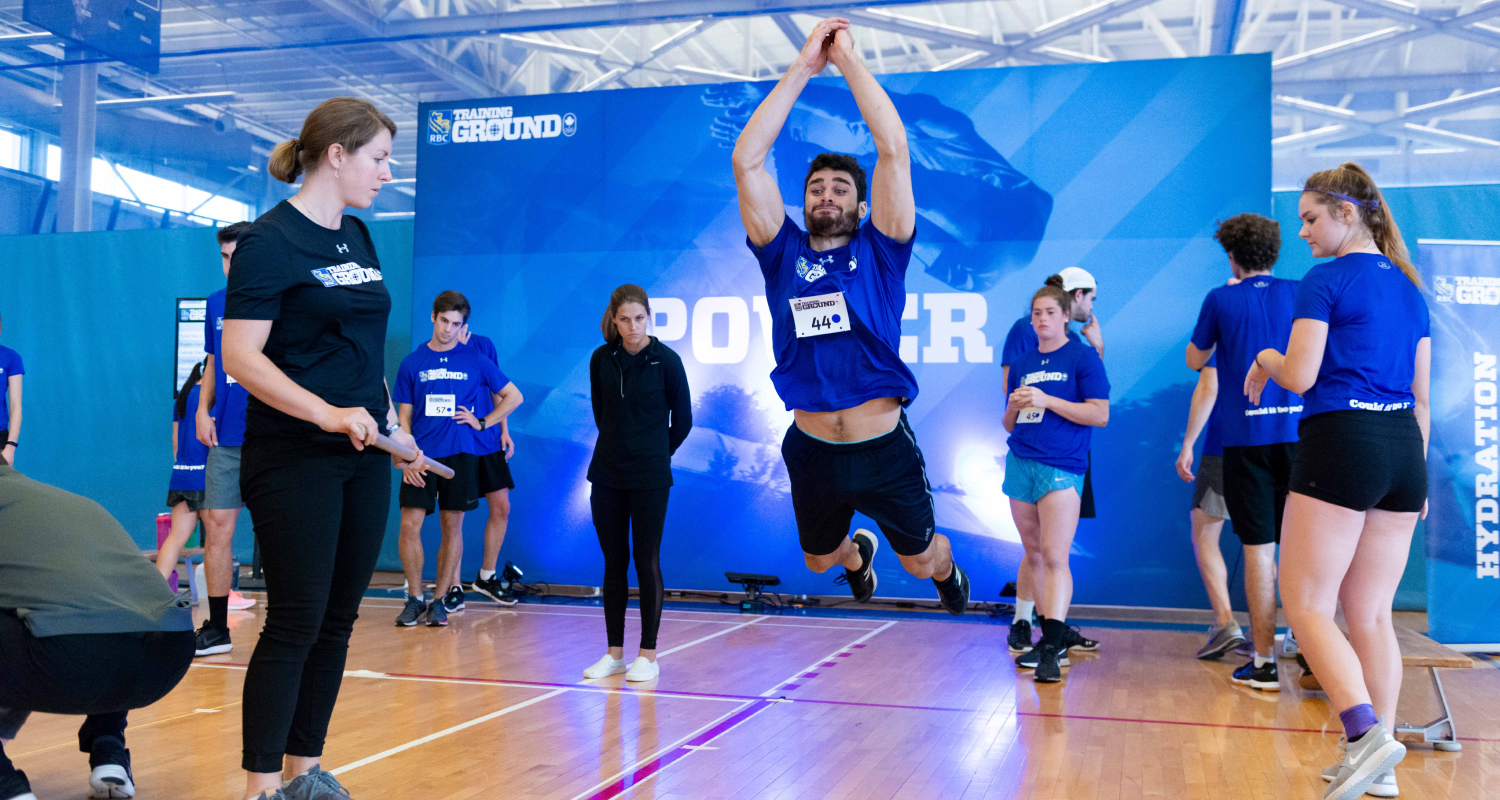 Mike Evelyn has always been drawn to the ice. For two decades, Mike was a high-level competitive hockey player, skating in the Central Canada Hockey League and for the Dalhousie University Tigers while earning a Degree in Electrical Engineering.

As Mike was coming up on his final year at Dalhousie, he was looking for an opportunity to continue his athletic career beyond the rink. Mike had the idea to attend RBC Training Ground in 2018, where he impressed Bobsleigh Canada and was soon recruited to the team.

Mike went on to attend a one-week session of sliding and learning to pilot a sled in Calgary, where he fell in love with the speed of the sport and made the decision to pursue Bobsledding full-time – an opportunity that got started by his participation in RBC Training Ground. Now in his second season with Bobsleigh Canada Skeleton, Mike has jumped into Chris Spring’s sled and has his eye on the 2022 Olympic podium. Well done, Mike! 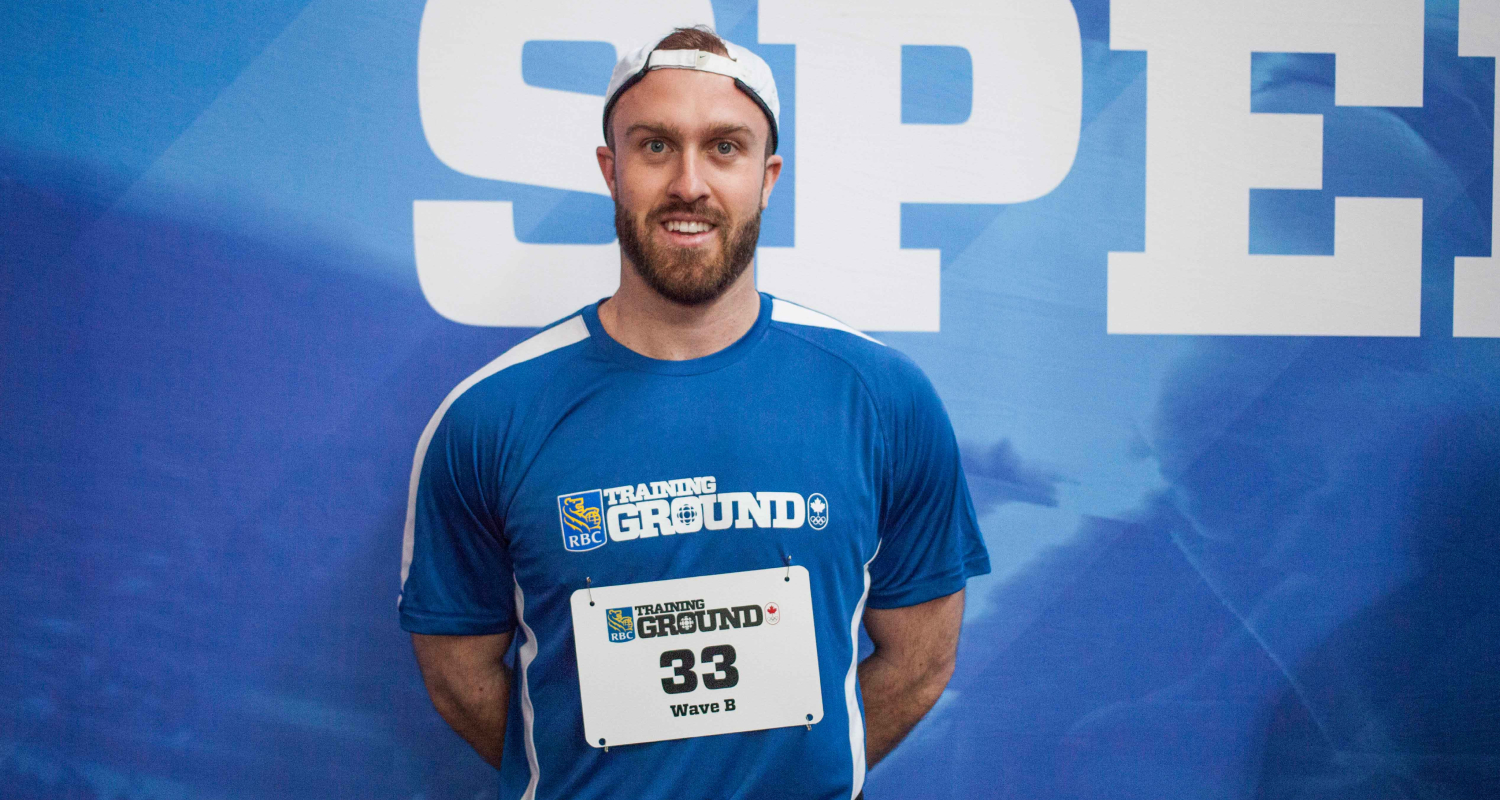 Ryan Sommer was the captain of his university’s track and field team before his Olympic dream was sparked while working as a forest fire fighter in Northern Alberta. While watching the Opening Ceremonies of the Rio de Janerio 2016 Olympic Games, he was dared by a friend to test his skills at a Team Canada recruitment camp for Bobsleigh. It was just the opportunity he needed – he relocated to Calgary the following month to train with the National Team and never looked back.

After a year in the sport, Ryan was seeking an extra push towards the Olympic podium. In 2017, Ryan decided to try out for RBC Training Ground, where he was successful in being named an RBC Future Olympian and received access to the funding and resources he needed to reach his dreams. Since then, Ryan has made an immediate impact on the Canadian Bobsleigh team and is on his way to compete in his first Olympic Games in Beijing.

Fun fact: Ryan’s first time attending an Olympic Games was when he travelled to PyeongChang in 2018 to watch his girlfriend (now fiancée), Blayre Turnbull, win the Silver medal for Canada in Women’s Hockey. 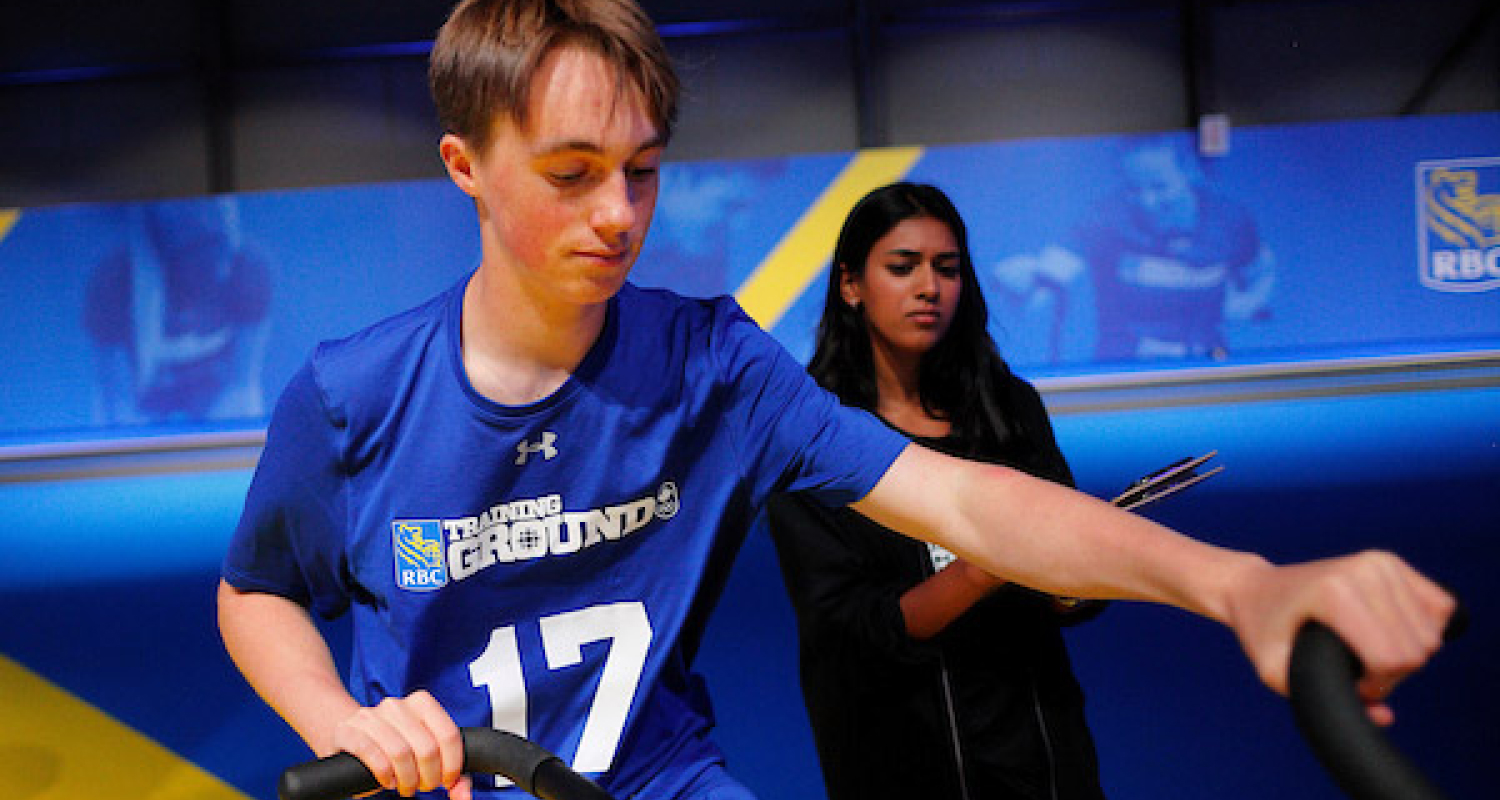 Miha Fontaine has Olympics in the genes.

So it was no surprise that when a 16-year-old Miha came to a Camp de recrues RBC event in 2019 he showed confidence beyond his years. His test results, combined with his rapid rise through Freestyle’s junior ranks, earned him a place at the 2019 RBC Training Ground national final. He again impressed, earning funding and RBC Future Olympian status.

“Camp des Recrues RBC gave me the chance to get to more competitions and camps and prove that despite my age I was ready to take the next step,” said Miha.

Over the past three years he has earned three top eight World Cup finishes, and even recorded a perfect score (the first in Freestyle Aerials since 2011) at a recent event in Deer Valley. And now, ahead of schedule, he is a member of Canada’s 2022 Olympic team.

In Beijing Miha will continue his father’s Olympic legacy. He will also be one of the youngest competitors at the Games, and continue to prove that age is just a number.