What is RBC Training Ground?

RBC Training Ground is a talent identification and athlete funding program designed to find young athletes with Olympic potential, and provide them with the resources they need to achieve their podium dreams.

With the belief that high performance sports should be accessible to all athletes that are talented, qualified and have the will to compete, this program travels the country searching for athletes between the ages of 14 and 25 that will fuel the Canadian Olympic pipeline.

National Sport Organizations (NSO’s) use combinations of these test results to identify skills that may translate to strong potential in their respective sport. Each sport requires different physical abilities and skills, and therefore performance benchmarks vary by NSO. Field based assessment results must be viewed within the context of the requirements of the sport, the characteristics of the athlete, and the stage of their development.

Open call to all aspiring athletes aged 14 to 25. Sign up for free.

This test is designed to measure your speed and velocity over 20m. 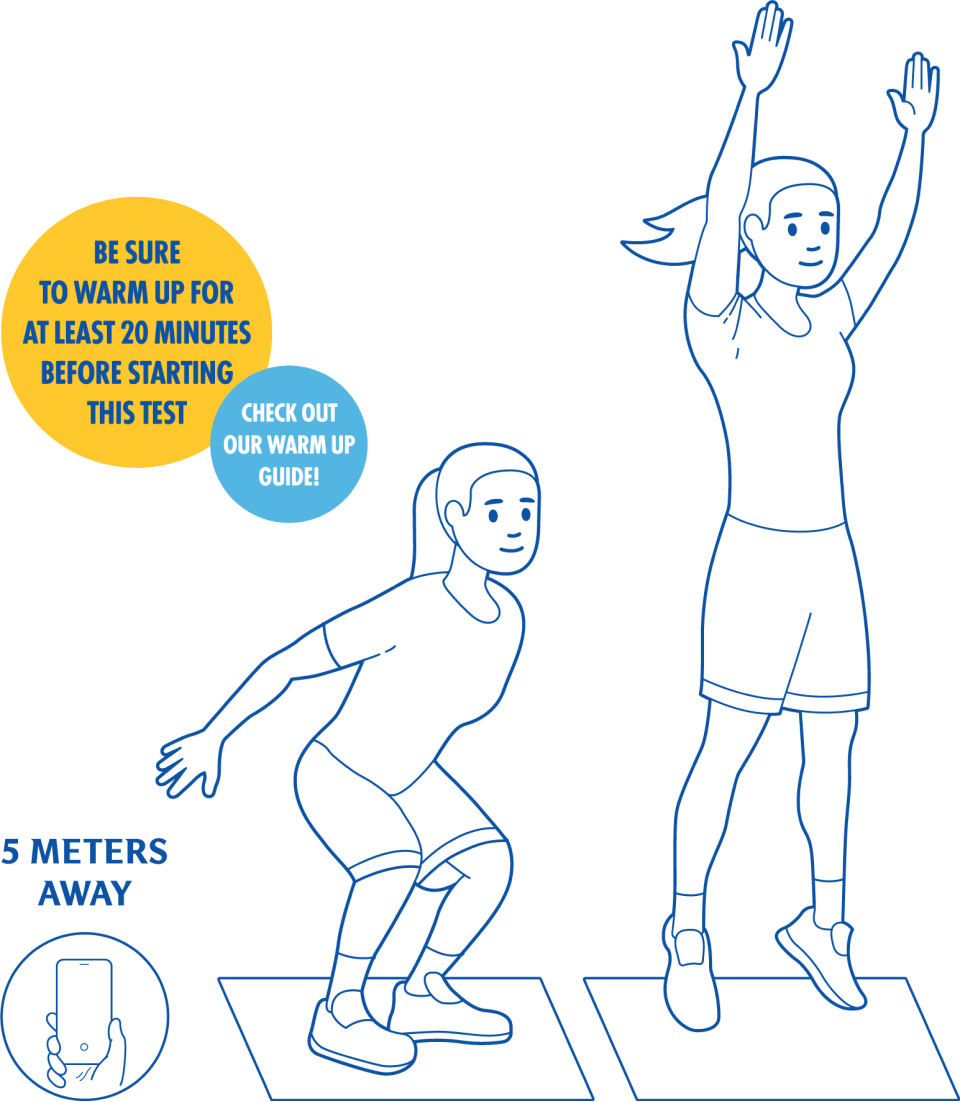 The Vertical Jump Test is designed to measure your lower body explosive power; the higher you can jump, the more power you have in your legs.

It is also commonly referred to as the Beep Test or Multi Stage Fitness.

The 20m multi-stage shuttle run, commonly referred to as the beep test, is a tool to measure an athlete’s aerobic capacity. Athletes run 20m from line to line before or at the 'beep' on the CD track. As the athlete advances in the test the 'beeps' get closer and closer together. The test is over when the athlete can no longer get to the line before the 'beep' sounds twice in a row. Athletes must pivot at the line, rather than in looping turns.

The top 100 from across Canada will be invited to compete. Sign up for free.

Athletes pedal flat out for six seconds on a stationary bike while remaining seated. An ergometer measures the peak wattage achieved and a second calculation factors in the athlete’s weight to determine watts per kg. The 6 second bike sprint is a key test for speed skating, and the sprint disciplines in track cycling.

The concept dyno is an exercise/piece of equipment used to test an athlete’s push/pull strength. On a seated machine resembling an indoor rower, athletes pull a bar to their chest as hard as they can. Athletes also perform a push movement to ascertain strength of both muscle groups. Athletes also perform a seated leg press to measure lower body strength. The concept dyno test employs the same muscle groups used in rowing and paddling sports.

From a standstill, the athlete jumps as far forward as possible landing with two feet. This movement is an important power test for all running-based sports, like rugby and athletics.

With both feet placed parallel, the athlete jumps consecutively forward three times. Like the single broad jump, it is a general test of power and indicator for acceleration.

This is an endurance test to measure aerobic capacity and an athlete’s ability to maintain power. On a stationary bike with moving arms, athletes must hit set revolutions per minute (RPM) targets. The test is over when the athlete is too exhausted to hit the set targets. Women start cycling at 50 RPM and men start at 60 RPM. This is a predictive endurance test for rowing and paddling.

The age range of 14 to 25 years aligns with long-term athlete development stages and the Canadian Sport for Life program. This age range allows us to capture those with early and late-stage Olympic potential athletes. The probability of identifying an athlete below or above these age ranges, within our current RBC Training Ground partner sports, is very small.

How do I/does my child compare against the performance benchmarks?

Each sport requires different skills and physical abilities with performance benchmarks that are dictated by our NSO partners, taking age and gender into account. Benchmarks can be viewed under the ‘Testing’ section of the website. Athletes that participate in RBC Training Ground virtual qualifying will receive a custom scorecard after they participate, which will help them compare their physical performance against our benchmarks.

How many athletes are tested?

Thousands of Canadians across the country participate in RBC Training Ground each year. We have tested over 8,000 athletes in the first five years of the program.

How do I/does my child participate virtually?

Athletes from anywhere across the country can participate virtually by following the instructions provided under the ‘Sign-up’ tab of our website. Participants must first register with their basic information online, will then complete a more detailed Athlete Bio, and input the results of their at-home testing (includes Sprint, Vertical Jump, and Shuttle Run, along with Height, Body Weight, and Arm Span). As proof of completion, athletes will also be asked to record these exercises and upload their videos to YouTube, providing the associated public or private YouTube link as part of their virtual submission

Which sports are recruiting new athletes through RBC Training Ground?

There are 9 National Sport Organizations (NSO) recruiting athletes through RBC Training Ground in 2021:

Does RBC Training Ground visit all provinces and major cities across the country?

We look forward to returning to a wide range of Canadian communities for in-person events when it is safe and responsible to do so.

What happens after I submit my virtual qualifying results online?

After submitting your virtual qualifying results, athletes may be contacted by one of our NSO partners and invited to attend a sport-specific testing session. All sport-specific testing sessions will follow the recommended public health guidelines in each province/territory, prioritizing the health and safety of athletes and staff.  Based on performances from virtual and sport-specific testing, the top 100 athletes will be selected to compete in the RBC Training Ground National Final and potentially earn funding support as an RBC Future Olympian. The National Final will take place in a time and format that places the utmost priority on the health and safety of participants. More information about the National Final will be provided after the virtual testing period concludes.

How are athletes selected to attend the RBC Training Ground National Final?

Coaches and talent identification representatives from the participating NSOs will select athletes based on a combination of athlete performances within virtual and sport-specific testing sessions. NSOs are looking for athletes who met or exceeded the predetermined benchmarks set by each of the sports.

What happens after the National Final?

The RBC Training Ground team will reach out to all athletes who attend the National Final with more information after the event. Up to 30 athletes from across the country will be selected as RBC Future Olympians. The applicable NSO will receive funding assistance that will be used towards each RBC Future Olympian’s travel, competition and training camp expenses, coaching, nutrition, etc., at the sole discretion of the applicable NSO. These funds will be administered by the Canadian Olympic Foundation to the select NSO directly.

At this time, we are focused on finding the next generation of athletes with Olympic potential. Para sport has different requirements for their athletes based on the different classifications and ability categories within each discipline. For more information on opportunities within Canadian Paralympic Sport please visit paralympic.ca/paralympian-search.

How has RBC committed to fueling the Olympic movement in Canada?

The Olympic Games represent excellence, teamwork, diversity and commitment - the same values that hold true for RBC, its employees, clients and communities. That connection is a major reason why RBC has been Team Canada’s longest-standing corporate partner since 1947. This commitment to the Olympic movement can be seen through the RBC Olympians program, as well as through its support for the next generation of Olympic hopefuls.

Serving as the official testing facilitation partner for RBC Training Ground across Canada.