RBC is passionate about helping communities prosper and fuelling bright futures for young people — and RBC Training Ground puts these values into action. Launched in 2016, RBC Training Ground finds and funds young Canadian athletes with Olympic potential and provides them with resources to pursue their Olympic dreams. Unlike any other, this program provides undiscovered athletes with a pathway to an Olympic podium and gives athletes an opportunity to find a sport that best suits their skills. And now, for the first time ever, athletes discovered through RBC Training Ground will be competing at an Olympic Games!

Learn more about our Tokyo-bound RBC Training Ground athletes below: 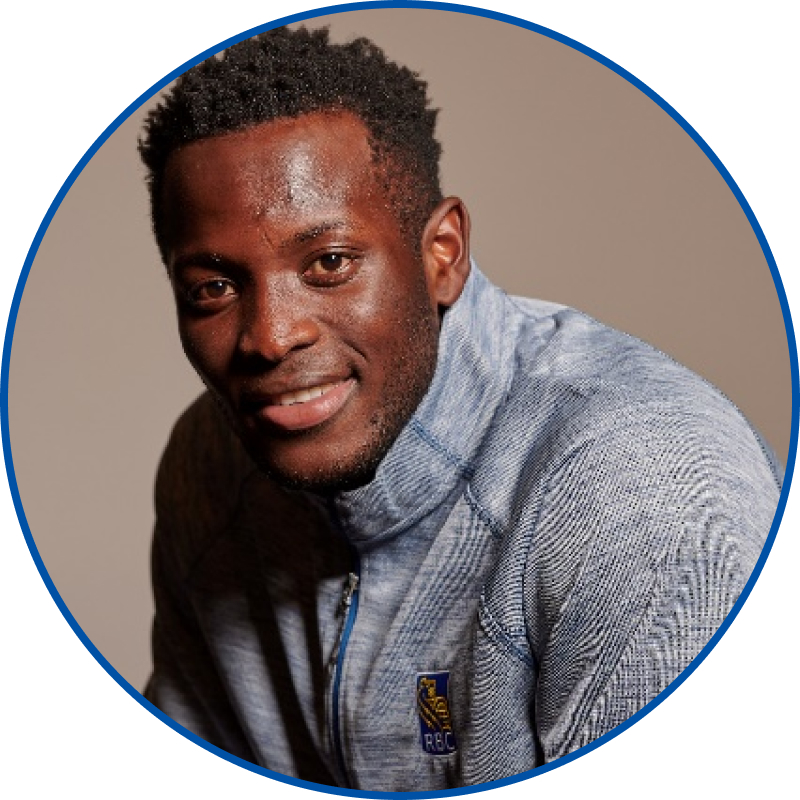 Growing up in Jamaica, Jerome was a high jumper and long jumper as a student, with a dream of representing Team Canada at an Olympic Games. After moving to Kelowna in 2013, Jerome switched to sprinting after his coaches recognized his incredible potential. In 2017, Jerome competed in an RBC Training Ground event in Kamloops and was chosen as one of 30 young athletes to be funded by the program. Then in 2018, Jerome was granted his Canadian citizenship and will be representing Canada at the Tokyo 2020 Summer Olympic Games. Still early in his sporting career, Jerome’s accomplishments are already making him one of the top 100m and 200m sprinters in the world. 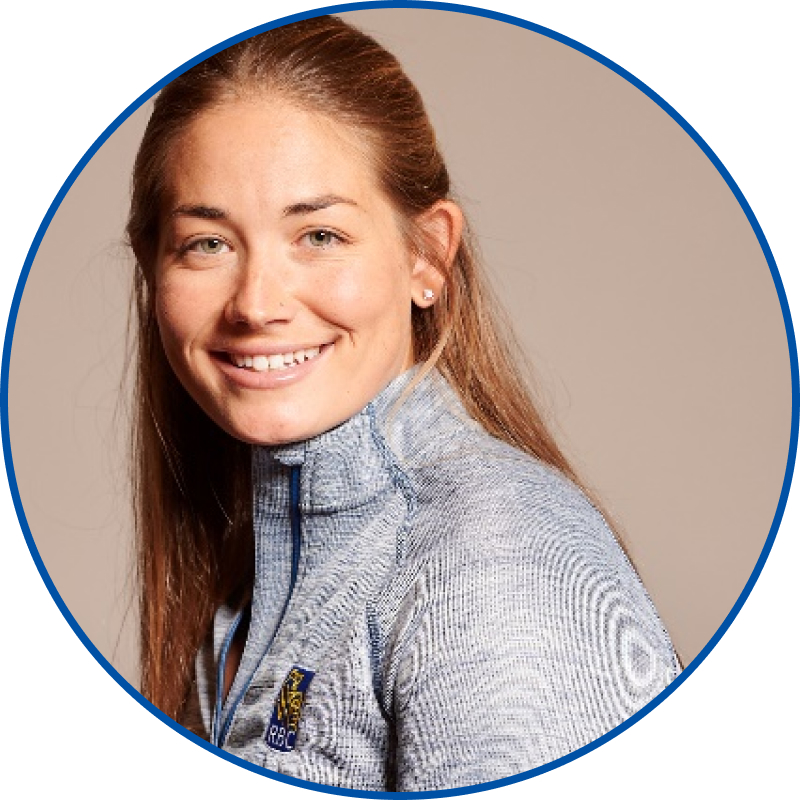 As a child, Alanna spent her summers paddling at the Burloak Canoe Club in Oakville. Always looking up to the multiple Olympians from her club, she knew she wanted to compete for Canada someday at the Olympics. Now at 28 years old, Alanna will be attending her very first Olympic Games.

Alanna took her training to the next level when she moved to Halifax in 2013 to train with the National team and pursue her academic goals. In 2016, Alanna competed at an RBC Training Ground event in Toronto and was selected to receive funding to further support for her Olympic dream. Alanna has competed at multiple U23 World Championships, Senior. World Championships, World Cup tours, and the 2019 Pan Am Games in Lima, Peru where she won two Gold medals. But Tokyo 2020 will be her first Olympic Games!

Alanna is also in the final stages of becoming a Registered Dietitian and hopes one day to help athletes reach their goals with the help of effective nutrition advice. 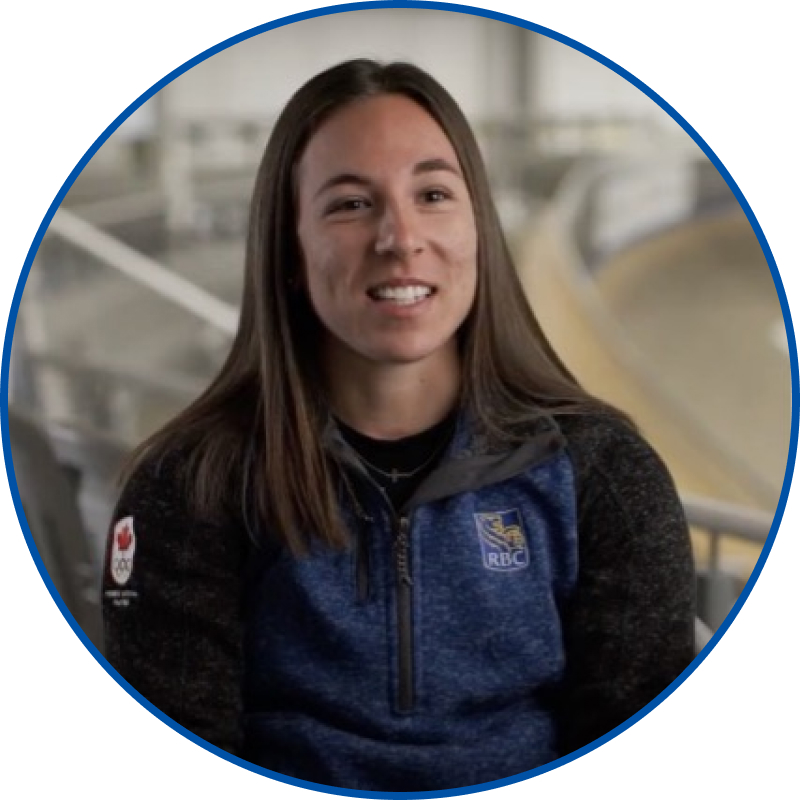 Lauriane has dreamt of representing Team Canada ever since she was five years old. Growing up, Lauriane was a figure skater but was attracted to cycling after feeling the need for speed. Fast forward to 2017 when Lauriane attended RBC Training Ground, which was a catalyst in her journey to the Olympic Games.

Within just a couple of years of her introduction to Sprint Cycling, Lauriane established herself as one of the top cyclists in the world. In 2019, Lauriane won two Gold medals at the Pan American Championships, taking the win in the Keirin event alongside fellow RBC Training Ground athlete Kelsey Mitchell. Now, Lauriane and Kelsey are both off to Tokyo to compete in the Olympics!

As a 6’8” high school student, Trevor started rowing at his local club in 2013 after it was recommended to him because of his height. He got his first taste of international competition at the 2015 World Junior Rowing Championships where Trevor was a member of the men’s quad sculls. Then in 2016, while in his second year at Trent University, Trevor was identified through RBC Training Ground, which provided him with additional funding and resources to accelerate his Olympic dreams. At the RBC Training Ground Toronto event, Trevor exceeded elite-level strength and endurance benchmarks, which caught the eye of Rowing Canada.

Eventually diagnosed with compartment syndrome in his left arm in 2018, the injury required two surgeries that kept him from making his Senior World Championships debut that season. However, Trevor was back in the single sculls at the final Olympic qualification regatta in May 2021 where he finished second in the event to qualify for Tokyo 2020, and will now be competing at his very first Olympic Games. 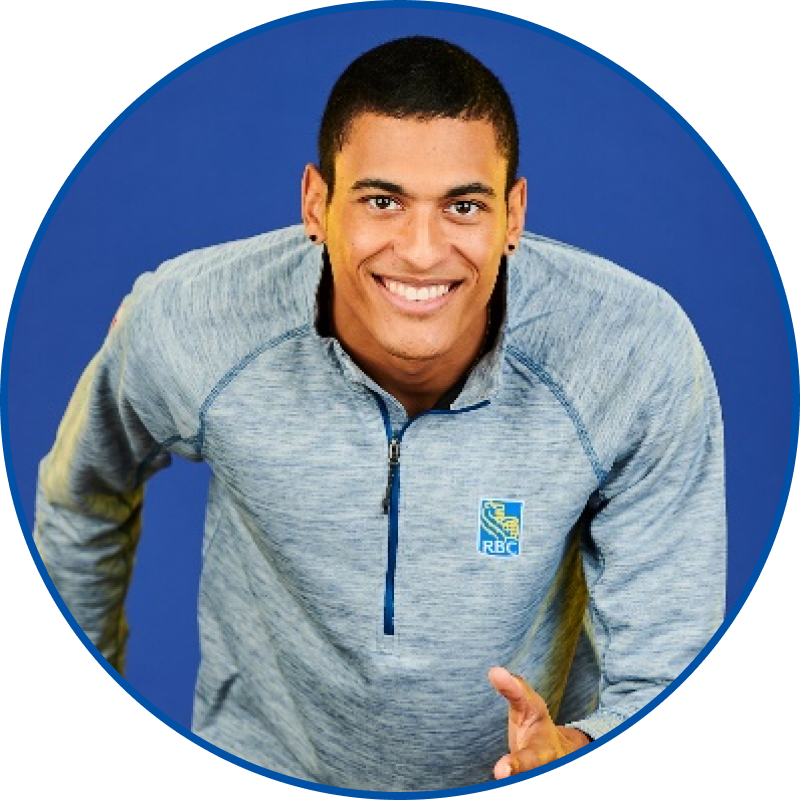 Pierce participated in a variety of sports growing up but didn’t start competing in Track and Field until he was 17 – when he broke the Junior National record. Pierce truly discovered his athletic potential when he won the 2016 RBC Training Ground Regional event in Toronto. At the event, his talent was identified by Athletics Canada, which was when his decathlon career really began. Since then, he has become a member of the Senior National team, winning medals at the 2018 Commonwealth Games in Australia and the 2019 Pan Am Games in Peru. He capped off a strong 2019 season, finishing the year in 4th position in the IAAF World Rankings and placed 5th in his first World Championship Decathlon competition. Along the way he set a new personal best in winning the prestigious Decastar Decathlon in Talence, France. Pierce is now headed to Tokyo to represent Team Canada.

Away from the track, Pierce is an avid fan and participant of Esports with League of Legends being his favourite game. 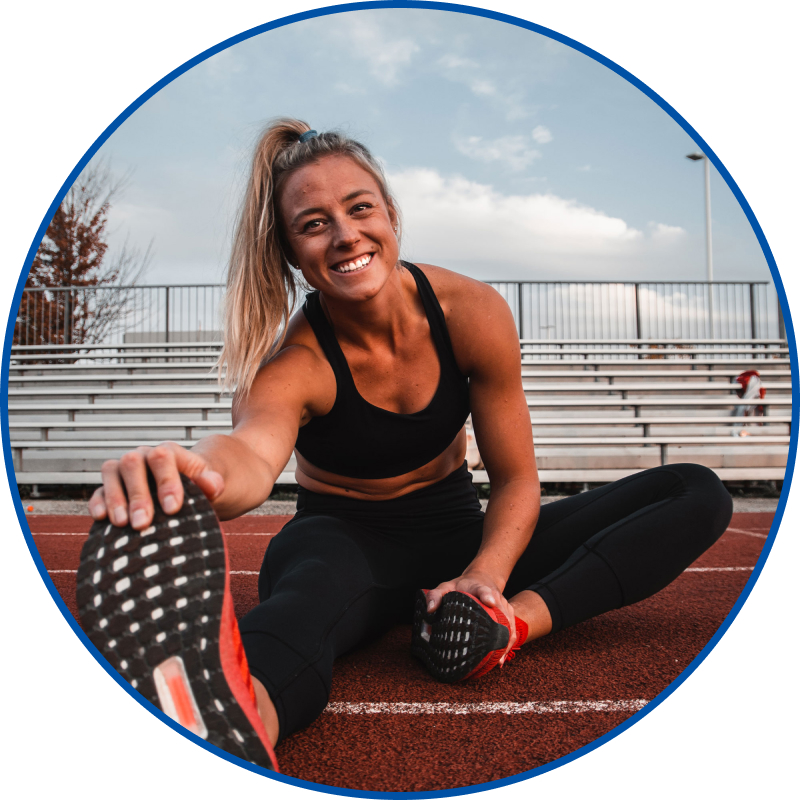 When Kelsey Mitchell finished her undergraduate degree at the University of Alberta in 2017, she felt lost. After playing soccer at the collegiate level for five years, Kelsey was disappointed to learn her athletic career might be coming to an end. When she discovered RBC Training Ground, she knew it was her last shot at making the Olympics. As it turns out, she was right! Kelsey completed a series of standardized tests at RBC Training Ground and was quickly noticed by talent scouts for the amount of power and strength in her legs — the result of nearly 20 years of soccer training. She was asked to join the Cycling Canada National Team, and soon after, she was breaking World records and qualifying for the Olympics. Pretty impressive for someone who had zero previous cycling experience! Now 26 years old and headed to Tokyo representing Team Canada, Kelsey credits RBC Training Ground for reviving her career as an athlete. 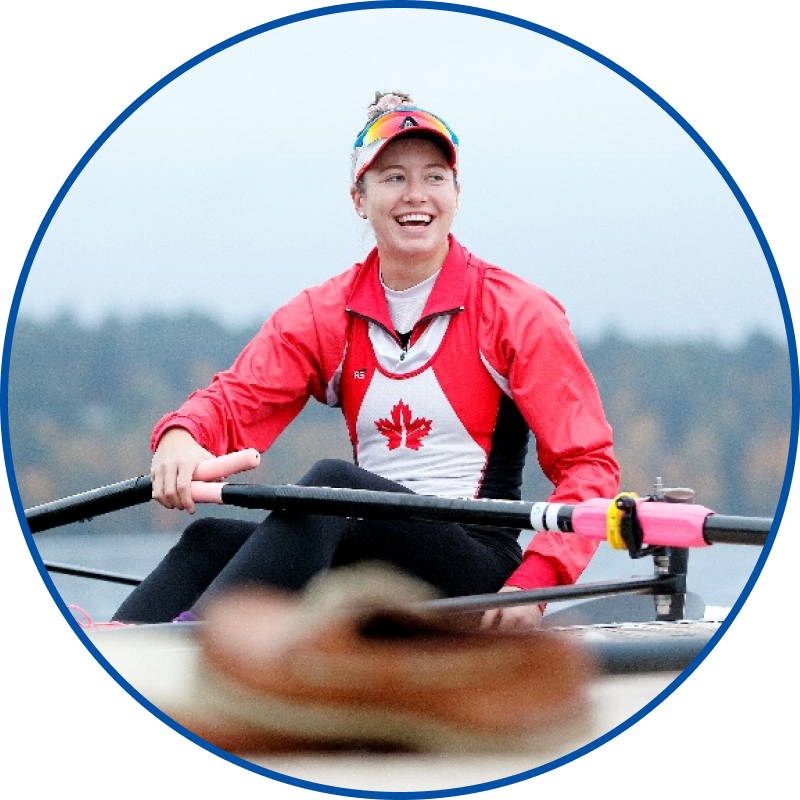 Gabrielle Smith first represented Canada at the 2014 Commonwealth Championships in Glasgow, Scotland. As a member of the National Development team, she competed twice at the U23 World Championships – but after the 2016 U23 Worlds, Gabrielle was forced to take time away from rowing due to stress fractures in three ribs. She stopped training for over a year as she went through rehabilitation to get her strength back. Healthy again in 2018, Gabrielle made her first appearance with the Senior National team in double sculls, winning a Silver medal at the final World Cup of the year in Switzerland. In 2019, Gabrielle won double sculls Bronze at the World Cup in Switzerland and ended the season by qualifying the boat for Tokyo 2020 with a fourth-place finish at the World Championship. It is the first time Canada will have a women’s double sculls at the Olympic Games since Atlanta 1996! 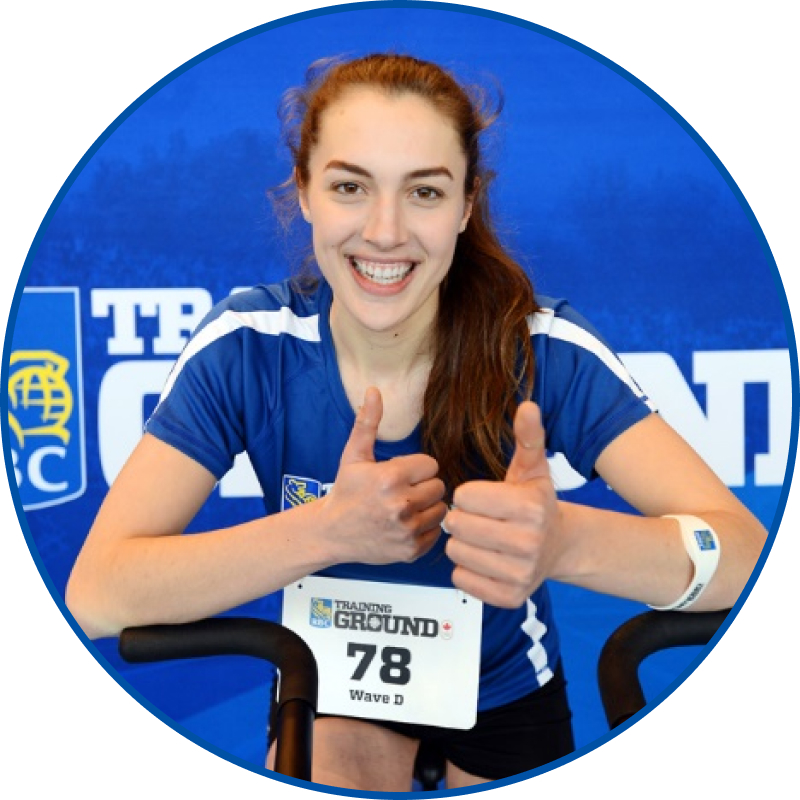 Even though Avalon’s mother and aunt were Olympic rowers, growing up Avalon never saw herself competing on the water. If anything, she thought her Olympic dream would be lived out on snow. A cross-country skier since she was five, Avalon did well in the sport and was a Junior National Championship medallist in 2014. When she started considering options for her postsecondary education, Avalon decided to ultimately pursue rowing at the University of Victoria – after all, her raw athletic skills match up perfectly with that of an elite rower. With only one year of rowing experience, Avalon made another late decision to attend RBC Training Ground in 2017, where she ended up winning the Regional Final in Vancouver. One of the perks of that victory was a trip to the PyeongChang 2018 Olympic Winter Games, which further fueled Avalon’s excitement to represent Team Canada someday. As part of the RBC Future Olympian program, Avalon received funding which allowed her to quit one of her two part time jobs while she pursued school and rowing full-time.